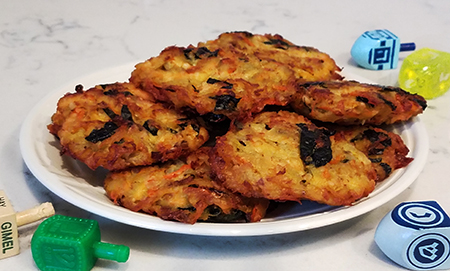 Unlike a lot of other Jewish holidays that can be more restrictive, Hanukkah, the festival of lights, is a fun holiday for the kids filled with eight nights of gifts, gelt (chocolate coins), jelly donuts, and my favorite potato latkes. Hanukkah falls around the winter holiday season when it could be really tough to eat healthy with all the festivities and yummy temptations.

This year I decided to embark on making a healthier latke that didn’t sacrifice taste. A latke is a fried potato pancake typically made with potato, onion, egg and a binding ingredient like flour, matzo meal or breadcrumbs. It is traditionally served with applesauce and sour cream.

I made several not so great batches until I landed on one that got two thumbs up from my kids. My recipe uses a smaller proportion of potatoes and includes healthy veggies like cauliflower, carrot, and kale without sacrificing the traditional latke flavor. This recipe is also gluten-free using almond meal instead of flour to bind the ingredients, without the almond flavor.

In the recipe directions below, I describe two cooking methods to cut calories from the typical fried method. The first method is to bake them in the oven first until the latkes set and then finish them off by browning in a skillet lightly on both sides and the second method is to cook it in a waffle maker.

You don’t have to be Jewish to enjoy this holiday treat, my dear Catholic Italian friend asked me to make it for her Christmas Eve gathering! 🙂

Serve latkes warm with apple sauce and sour cream. Greek yogurt can be used as a healthier substitute to sour cream.

Busy Mom’s Cheat Sheet Tip: To make sure the latkes are well seasoned before you cook them, you can microwave a forkful of the mixture for 10 seconds and taste it.